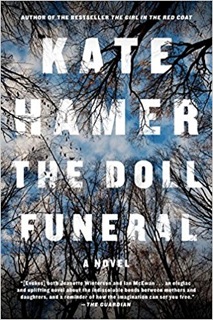 On Ruby’s thirteenth birthday her parents inform her that she was adopted. For most people this would be devastating news but for Ruby it’s a relief since she has no affection for her parents. Her father Mick is physically and verbally  abusive and her mother Barbara turns a blind eye to his transgressions. Neither parent has provided love or emotional support. Armed with new information, Ruby decides to search for her natural parents with hopes of a better place to live. On her journey, we are introduced to an mystical entity named Shadow who provides some needed guidance.

We are then introduced to seventeen year old Anna who is pregnant and unmarried. Anna is planning to give the baby up for adoption. Her boyfriend, Lewis, changes her plans with an offer of marriage after a move to London.  Anna becomes lonely in the new country and Lewis pays the bills with criminal activities.

Ruby and Anna’s stories alternate by chapter until they finally converge. Through the development of these characters, the book explores the natural bond formed between a mother and child. This novel by Kate Hamer has a supernatural element which becomes relevant as the stories merge.

2 thoughts on “The Doll Funeral by Kate Hamer”