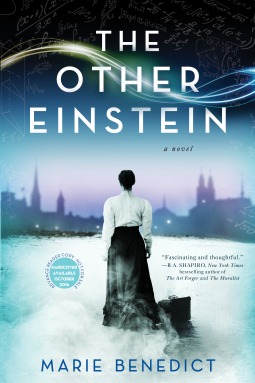 A vivid and mesmerizing novel about the extraordinary woman who married and worked with one of the greatest scientists in history.

What secrets may have lurked in the shadows of Albert Einstein’s fame? His first wife, Mileva “Mitza” Marić, was more than the devoted mother of their three children—she was also a brilliant physicist in her own right, and her contributions to the special theory of relativity have been hotly debated for more than a century.

In 1896, the extraordinarily gifted Mileva is the only woman studying physics at an elite school in Zürich. There, she falls for charismatic fellow student Albert Einstein, who promises to treat her as an equal in both love and science. But as Albert’s fame grows, so too does Mileva’s worry that her light will be lost in her husband’s shadow forever.

A literary historical in the tradition of The Paris Wife and Mrs. Poe, The Other Einstein reveals a complicated partnership that is as fascinating as it is troubling.

Mileva Maric was the only female student studying physics at a prestigious university in Zurich in 1896. It is here that she met a young student in her class named Albert Einstein. Albert takes an interest in her, and a romantic relationship evolves between them.  This book details how their relationship changes over time

Written in the voice of Mileva, this historical novel is about the difficulties she encountered while married to Einstein. What starts as a young exciting relationship turns into an abusive neglectful one. Mileva sacrificed her own career dreams by catering to the needs of her husband and family. The book delves into how Mileva eventually felt she was living in Einstein’s shadow. It has been speculated that she contributed to the theory of relativity but her named was omitted by Einstein.

This is an interesting story of love, loss and science.   Readers are spoon fed real history about Einstein while watching this drama unfold.  I came away with a better appreciation for the contribution from both of these individuals.

Einstein is known as a genius, but as the saying goes, behind every great man is a great woman.