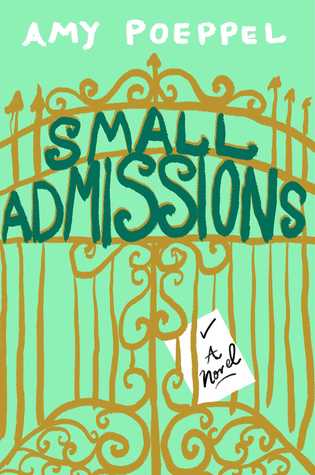 For fans of The Nanny Diaries and Sophie Kinsella comes a whip-smart and deliciously funny debut novel about Kate, a young woman unexpectedly thrust into the cutthroat world of New York City private school admissions as she attempts to understand city life, human nature, and falling in love.

Miraculously, and for reasons no one (least of all Kate) understands, she manages to land a job in the admissions department at the prestigious Hudson Day School. In her new position, Kate learns there’s no time for self-pity or nonsense during the height of the admissions season, or what her colleagues refer to as “the dark time.” As the process revs up, Kate meets smart kids who are unlikable, likeable kids who aren’t very smart, and Park Avenue parents who refuse to take no for an answer.

Meanwhile, Kate’s sister and her closest friends find themselves keeping secrets, hiding boyfriends, dropping bombshells, and fighting each other on how to keep Kate on her feet. On top of it all, her cranky, oddly charming, and irritatingly handsome downstairs neighbor is more than he seems. Through every dishy, page-turning twist, it seems that one person’s happiness leads to another’s misfortune, and suddenly everyone, including Kate, is looking for a way to turn rejection on its head, using any means necessary—including the truly unexpected.

Kate Pearson quits graduate school to live in Paris with her French boyfriend, Robert.  She is blindsided by Robert as he quickly breaks off the relationship and she ends up moving back to New York City. Kate spends a good part of the year living on her sister’s couch, watching television and barely functioning. Her two friends from college and her sister were doing everything they could to get Kate back on her feet. They eventually find her an apartment to sublet and a dog walking job, in the hopes that she can pull herself together.

She eventually lands a job interview at an admissions office for a small Manhattan private school. Kate leaves the interview feeling that she botched it the because of her inappropriate answers to questions and her profuse sweating. Surprising herself, Kate gets the job and enters into the competitive world of admissions. Although feeling unqualified, she slowly begins to settle into her job and with her two co-workers. She interviews a multitude of children, deciphers essays and meets with stressed out parents.

While Kate seems to be progressing with her newfound career, her sister is still greatly concerned. She micromanages her with unsolicited advice amid worries that she will regress back into depression. Her friends continue to stay in contact with her but have ulterior motives.

The dialogue during parent and student interviews was very humorous and I laughed out loud a few times.  This book was fun and entertaining and I look forward to future works from Amy Poeppel.