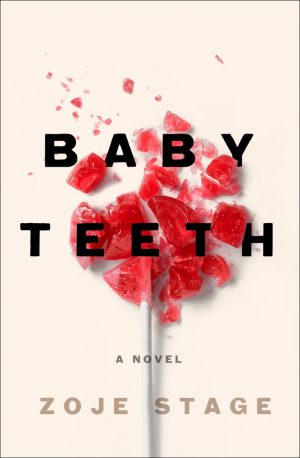 Suzette is homeschooling her seven-year-old daughter Hanna. She is out of options after Hanna is expelled from numerous schools. Her daughter is highly intelligent but has severe behavioral issues and rarely speaks. Her behavior is uneven with most of the volatility directed towards her mother.  When her father is around she is well behaved and loving.

Hanna adores her father and doesn’t want to share his attention. She devises calculated attacks against her mother which slowly wreak havoc on her health and emotions. This also weighs on Alex since he works long hours and then returns to an unhappy home.  Alex never witnesses any extreme behavior and wonders who is really at fault. Suzette is in a constant battle to convince her husband that something is terribly wrong with Hanna.  At the same time, she braces herself for Hanna’s newest scheme.

As a reader, I love books with an edge and Baby Teeth hit my sweet spot. The family dynamics were well written and the guilt and anguish felt by the parents came through clearly. I found the book hard to put down and delighted as I squirmed through the building tension.  This is a debut novel by Zoje Stage.