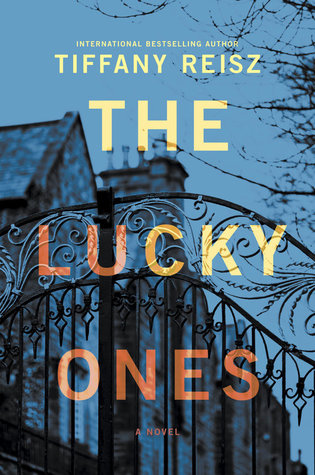 They called themselves “the lucky ones.” They were seven children either orphaned or abandoned by their parents and chosen by legendary philanthropist and brain surgeon Dr. Vincent Capello to live in The Dragon, his almost magical beach house on the Oregon Coast. Allison was the youngest of the lucky ones living an idyllic life with her newfound family…until the night she almost died, and was then whisked away from the house and her adopted family forever.

Now, thirteen years later, Allison receives a letter from Roland, Dr. Capello’s oldest son, warning her that their father is ill and in his final days. Allison determines she must go home again and confront the ghosts of her past. She’s determined to find out what really happened that fateful night–was it an accident or, as she’s always suspected, did one of her beloved family members try to kill her?

But digging into the past can reveal horrific truths, and when Allison pieces together the story of her life, she’ll learns the terrible secret at the heart of the family she once loved but never really knew.

Fantastic,” he said. “Another patient cured. That’ll cost you two bits.”
“What’s a bit?”
“I have no idea,” the bearded man said. “Used to hear it on TV all the time—shave andl a haircut, two bits. Never did figure out how much two bits was.”
Allison looked around, saw a tissue box and ripped two pieces off one tissue.
“Here,” she said, holding them up in front of his face. “Two bits.”
“Are you sure?”
“You said you didn’t know what they are,” Allison said. “So how do you know those aren’t bits?”
The bearded man looked at the two tissues in his hand, stuck his lips out and nodded.
“You’re a very smart little girl,” he said. “I accept your payment. And I give you a clean bill of health. Now tell me, what’s going on with you and this Melissa?”
“I sat in her chair. She didn’t like that.”
“And she hit you?”
Allison said nothing.
“You know,” the man said, “sometimes kids learn to hit from their parents. Their parents hit them and then they don’t know any better.”
“I know not to hit,” Allison said.
“That’s because you’re so smart,” he whispered again. A whisper, then a wink. She didn’t know why he was whispering. Everyone in the house was a shouter. Melissa shouted and the other two girls shouted and Miss Whitney shouted at them all to stop shouting. Allison didn’t shout. She cried. She hid. She slept. But she never shouted.
“How’s the patient?”
Allison turned to see Miss Whitney coming into the bathroom.
“She’s on track to make a full recovery,” the bearded man said. “If we can keep her out of the path of slappers.”
“That’s not going to happen in this house,” Miss Whitney said with a sigh.
“No word on the father?” he asked.
“No father on the birth certificate. Sole living relative is a great-aunt who would take her if nobody else turns up. But she’s seventy, lives in Indiana, and she’s been sick.”
The bearded man harrumphed. Allison hadn’t ever met her great-aunt, a lady named Frankie who lived really far away, though she’d seen Christmas cards from her.
“I gotta figure something out here,” Miss Whitney said. “Allison weighed forty-seven pounds when she got here. Yesterday she weighed forty-two. One month.”
The bearded man harrumphed and whistled this time.
“Let me talk to her,” he said.
“You are talking to me,” Allison said.
“She’s very bright,” the bearded man said to Miss Whitney.
“Told you so. Reads on a fifth-grade level. Eats like a toddler.” Miss Whitney patted Allison on her knee. “Sweetheart, this is a good friend of mine. Vincent Capello. He’s a brain surgeon. We used to work together at a hospital in Portland. He was nice enough to come all the way out here to check on you. Brain surgeons usually don’t make house calls, so you should feel very special.”
“She is very special,” the man said. Allison grinned, happy to have someone being nice to her for the first time that day. She was still sitting on the bathroom counter. She wasn’t tall enough to be able to jump down without help yet and the bearded man, the doctor, had left her up there.
Miss Whitney left her alone again with the man who didn’t do anything at first but tug his beard hairs.
“Do you like it here, Allison?” he asked.
Allison’s mother had taught her not to complain, ever. Not so much out of politeness but because it never helped anything.
“I like Miss Whitney,” Allison said.
“She is a very nice lady.” The man nodded in agreement. “Do you like the girls here?”
Allison didn’t answer.
“Allison? Do you like the other girls here?”
“I’m not supposed to say.”
“Why not?” The bearded man furrowed his brow.
“If you can’t say something nice, you shouldn’t say anything at all.”
He laughed.
“I guess I have my answer. You have quite the moral compass, young lady,” he said. “Adults could learn from you.”
She smiled broadly. She didn’t know what a moral compass was, but she knew a compliment when she heard it.

7 thoughts on “Book Excerpt: The Lucky Ones by Tiffany Reisz”